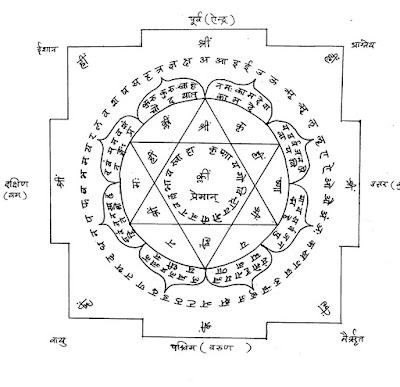 
Gopāla is an epithet of Kṛṣṇa in the form of a young cowherd boy in Vṛndāvana.

Yantra - consists of the root yam - "to sustain, control or hold". Meanings for the noun derived from this root include:

• "any instrument or machine" (i.e. that which is controlled or controls. For instance the body is said to be a yantra)

• "any instrument for holding, restraining, or fastening" (for instance a symbol which 'holds' the essence of a concept, or helps the mind to 'fasten' on a particular idea)

• "a mystical or astronomical diagram" (usually a symbol, often inscribed on an amulet) sometimes said to possess mystical or magical powers.

tra - is an Indo-European suffix meaning ' instrument', found in Latin 'aratrum' and in mantra and tantra, hence a literal translation would be "instrument to control".

O' Sage, I shall now describe to you the understanding of a yantra, which when worshiped awards wealth to the worshiper. First, one should settle on a place in his house or in the forest, or a secluded space within a temple of the Supreme Lord.

One should draw on the platform with sandalwood paste a lotus flower having eight petals. Then, within the whorl of that lotus, one should draw triangles forming a hexagon.

In the middle of the hexagon, an intelligent devotee should write the kāma-bījākṣara, along with his personal ambition. One should also write “klīṁ kṛṣṇāya namah”. Then a learned scholar should surround the kāma-bījākṣara with the other seventeen syllables of the eighteen-syllable mantra.

One should write the six-syllable kṛṣṇa mantra on the six joints of the yantra. The syllabic letters of kāma-gāyatrī mantra should be written around the petals of the lotus.

After preparing the Yantra by writing on silver, copper, gold plate or leaf, one should invoke life into the Yantra by chanting the appropriate mantra.

Thereafter, he should perform a fire sacrifice by offering one thousand oblations of ghee. Then, he should worship the yantra and chant his mantra ten thousand times as japa. After completing the ritual, one should wear the potent yantra.

By wearing this yantra, one achieves all the opulence of the three worlds and is venerated by the demigods. The consorts of devas and nāgas become attracted to one who wears this yantra.

Yakśa , Rākśasa (demon), Bhūta (ghost), hobgoblins, wild animals, and serpents run away to a great distance from one who wears this Yantra.

Miscreants run away in fear when they see someone wearing this king of Yantras. Everyone becomes happy by the influence of this Yantra and so, what more can I say?

This Yantra attracts all kinds of females, keeps the rulers of men under control, awards mystic perfection to great yogis, delivers one from the ocean of material existence, awards on material enjoyment and liberation and ultimately enables one to return to the transcendental abode of the Lord, Śrī Vaikunṭḥalokas. This is confirmed by Brahma.